I took the time to test Windows 7 thoroughly I was amazed how much improvement I saw and I am still experiencing in comparison with previous Windows versions.
Although Windows 7 is based on a recoded and optimized Vista core, it is much faster than Vista and a bit faster than Windows XP.
This operating system is very responsive and clear structured. It feels like a programmer was sitting next to a standard user, asking him every time “what do you expect here? What would you like to see? What would make sense to you here?” Even the help files are the best I have ever seen in any program.

A few weeks ago I had the chance to test the new Snow Leopard operating system from Mac — so I had a good chance to compare these two. Trying to install a network printer on the Windows network, I consulted those help files and immediately ran into trouble because the described steps were not available in that operating system. It was strange to receive the guidance of click A and select B, where B. was not even listed. In the Windows machine the network printer was automatically installed. Wow!

Wherever I went, the computer choose the available wireless network and connected to it as a public network. Wow again!

The annoying confirmation pop ups that we saw in Vista has been dramatically decreased. It now actually serves the purpose it was originally made for — making users aware that they are making changes to their computer.

If your machine has at least a dual core processor — definitely yes.Â  To be sure, run the Windows upgrade advisor from the Microsoft website. It will also tell you which of your old programs won’t run under Windows 7.

If you run XP, your will have to make a fresh install. There is no way to upgrade directly. But be advised that the new Windows 7 Migration Wizard make that a charm: You can even choose which programÂ  settings to migrate!

Vista Users can upgrade directly, but seeing the ease of installing and migrating to the new Operating System via Migration Wizard, makes you think twice.

To keep your PC running smoothly, some things should be done frequently:

Some files that collect during installing new programs and browsing the Internet can be deleted after a while. 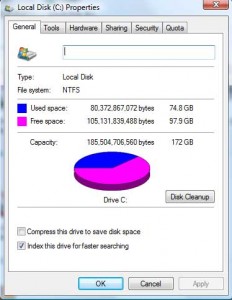 To do that click on My Computer, right — click on your local drive C.
It will open a context menu showing properties as the last item.
Opening the properties menu you will see several tabs, General being the first one.
Here you see how much your hard drive has filled up, generally any computer that has less than 25% of free space left will slow down noticeably.
If you click the clean up disk button, Windows will calculate how many files can safely be erased to free up space on your hard drive. You can review this offer and click OK.
Be aware that this can take a long time if you don’t do this regularly.

You will also notice that Windows offers you to compress old files. These are files that you have not accessed in a long time. It will take additional time to do this.

It will make sense to run a defragmentation afterwards.

Defragmentation also takes care that files that are being used more frequently are easy accessible. We suggest performing this task regularly. There is software out there which does that automatically for you, Diskeeper being one of them. 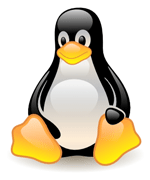 The other day I received a computer that needed to be rebuilt with a new hard drive. Since I am always curious about software, it was a chance to ‘play’ with Linux. Linux is a free Operating System that basically everyone can contribute to. While it is a big competitor for Microsoft on servers, only few people use it as a desktop operating system. You will find it sometimes on low-cost computers. The last time I looked at it was already seven years ago.

Question: Is Linux ready for everyone?

I downloaded the current most used distributions Ubuntu and SUSE.
Starting with Ubuntu I was surprised how easy everything went. Nice and clean interface, easy to handle for beginners. It also seemed to require less computing power — my old Athlon processor with 512MB Ram and a standard graphic card were sufficient.

Included software: Evolution as an Outlook replacement, FireFox as a web browser, OpenOffice as a (very good) substitute for the Word/Excel/PowerPoint applications are easy to learn (easier and more intuitive than Office 2007). Solitaire is also there. Everything free! Many additional programs can be downloaded for free.Â  But looking atÂ  known web pages, I notice some differences, but cannot put my finger on what it is.Â  Of course the graphic styles of all interfaces are more simple, no Aero style as in Vista. So far so good.

Then the first bummer: installing a flash player for FireFox is not working as smoothly as on Windows. Several to choose from,Â  not working instantly,Â  I am searching for solutions finally it works.
Next bummer: what about some a photo editing program? Gimp is easily installed, but it is not as intuitive and easy to handle as Photoshop or Photoshop Elements (that is where many users are coming from). The manual and help files are a nightmare. There is a Google program called Picasa available for basic photo editing.
Another bummer: trying to open existing Photoshop files with Gimp,Â  I notice that the Windows standard fonts are not installed by standard on Ubuntu – the MS core fonts can be downloaded, but that’s it. This is also the reason, why web pages looked a bit weird: usually even on MACs these core fonts Arial, Verdana, Times etc are available. Not standard on Ubuntu. Changing the standard font is relatively simple.

A similar experience is the free web publishing tool: the interface is simply not as intuitive as Dreamweaver or GoLive. You get what you pay for.

Since Windows has a market share of 90 plus percent, all the bad guys are targeting Microsoft’s operating systems, which need an ongoing updated protection.
With a tiny market share, Linux does not have that problem so far. I am still wondering why I have to put in my admin password when installing software or doing administrative stuff. The password needs to have eight letter/numbers. Come on, guys!

I tried to join a windows workgroup, but I gave up after an hour fiddling around and researching. Something that should be considered improving.

The Suse desktop is more appealing and has Microsoft Core Fonts pre-installed. Also here, joining the Windows workgroup is unsuccessful. Even worse: while installing different programs, or even for checking email, I have to put in my password pretty often. Did anyone complain about Vista’s pop up when you do administrative things?
This is far worse.

My suggestion about Linux:

If you need something basic and do not need to be on a windows network — fine.
If compatibility matters — better go the old way, unless you are a geek that enjoys challenges.

On the desktop market, Linux is still an isolated solution.

Since Microsoft introduced Windows about two years ago, numerous people have been complaining about this new operating system. I was one of them. Many drivers were not available, it was a hassle to install a two year old HP printer.
Sometimes ‘something happened’, and Windows would tell youÂ for hours that it was ‘looking for a solution’.

Even the task manager did not allow advanced users to simply shut down the machine and restart.
Things have changed.
Now, afterÂ  SP1, I have not seen a single hang up or crash of this operating system on several machines.
Pretty amazing. I myself enjoy the Home Premium Edition, record shows from TV and have the commercials automatically removed!
I enjoy the Aero interface, and I am wondering why people complain about the slow machine with Vista.
Of course a new operating system always requires more hardware. But in return we get more stability and a more flashy interface for those people who need something to play with.

Even Vista Basic on a dual core processor offers decent speed and everything you need.
I have never been a friend of operating system upgrades. I usually recommend installing fresh, especially after a few years of usage. Also here I keep it this way: if you buy a new computer, consider Vista.
It’s far better than in the Mac commercial.

If in doubt, call me.

One of the most common mysteries on Windows computers is the unintended moving of the task bar.

Usually it happens by mistake, and the task bar ends up on the sides or on of the top of the screen. Getting it back into the normal position is actually pretty easy:
put your mouse pointer on one of the spots highlighted on our image (if it ended up vertically, these points will be below the start-button), hold down the left mouse key and pull the task bar back to its normal position. Release the mouse key — done.

Note that the task bar can only be moved when it is unlocked.

So if your task bar ended up in the wrong place, it was certainly unlocked. To lock it again, just right click on an empty place on your task bar and check mark look the task bar.
Now you will not see all the quick launch buttons, but you certainly will not misplace it again.